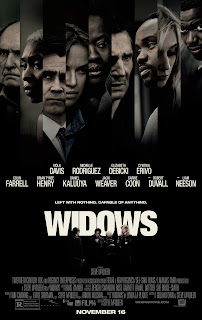 This review was first published by The Student Pocket Guide

The stakes are high in Steve McQueen’s latest project. That said, when have the stakes never been high in his films? Director of Hunger, Shame, and 12 Years a Slave (the latter earned him an Oscar and BAFTA for Best Film), McQueen’s body of work has seen him tackle Irish hunger strikes, sex addiction, and nineteenth-century slavery. In his latest, Widows, three women get together to pull off a heist which will, quite literally, save their lives. And it’s brilliant.

Widows introduces us to big-time criminal Harry Rawlins (played by Liam Neeson), who meticulously plans and records every past and future heist in a secret notebook. Harry bites off a bigger job than he can chew, however, and steals $2m from Jamal Manning (Brian Tyree Henry), a crime boss who just happens to be running for local elections. The job goes wrong and Harry and his team are killed, leaving behind his wife Veronica (Viola Davis) to deal with the consequences when Manning comes looking for his money. Veronica has little choice but to take on Harry’s next planned job herself, and recruits the widows of Harry’s gang mates to help her.

What ensues is a taut and thrilling heist film with a compelling narrative, stellar performances, and enough grit to winter-proof the M5. Jamal Manning is running for public office in a depressed and forgotten neighbourhood of Chicago: predominantly black and plagued by unemployment and a lack of opportunity. Running against him is Jack Mulligan (played by Colin Farrell), a wealthy politician who enjoys just a bit of nepotistic good fortune. Publicly, Mulligan and Manning plan to conduct a fair democratic battle, but in private, both are linked to the criminal world of Harry Rawlins.

The plot sees Harry’s wife assemble her team of widows in fairly conventional heist-movie fashion. Michelle Rodriguez (most famous for the Fast & Furious franchise) plays one of the widows, left with two children and a dress shop which has been repossessed by a man to whom her husband owed gambling debts. Elizabeth Debicki completes the team, a naïve young woman who turns – at the suggestion of her vampish mother – to escorting so she can pay her way through life. Veronica gathers the group together (in the rather unlikely venue of a sauna) to brief them of the danger in which they find themselves after their husbands’ deaths, and to convince them to help her pull off the heist.

As Veronica, Viola Davis again asserts herself as a cinematic tour-de-force, displaying both vulnerability and brute strength of will as she negotiates her way through her post-Harry life. Veronica’s pain of losing not only her husband but also her son to police violence is hard to watch, but ultimately creates a character with whom the audience can empathise to a great extent. Davis provides the strongest of anchors for the other cast members to shine, and both Debicki and Rodriguez give fine performances.

McQueen (together with Gone Girl screenwriter Gillian Flynn) crafts a tensile script which explores a whole range of affecting social and personal issues, ranging from grief to corruption and racism. To be sure, the heist is the central driver of the plot: the actual sequence is shot with a thrilling tempo and is scored with an unrelenting, yet subtle, score from everybody’s favourite film composer, Hans Zimmer. Elsewhere, the level of violence is shocking, and yet it feels appropriate as it raises the stakes for the characters and, therefore, makes their actions all the more convincing. Crime boss Manning has his brother to do much of his murderous dirty work, played by Daniel Kaluuya in a suitably unhinged performance.

Under the direction of Steve McQueen, Widows becomes more than just a heist thriller. It engages with troubling ideas and issues which are rendered with sensitivity and power by its actors. McQueen’s muscular and intense style works wonders to create a dark world where women – full of tenacity and strength – are given the chance to determine their own fate. 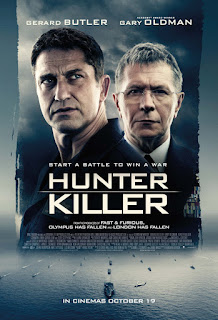 Dive, dive, dive! More like dull, dull, dull! Gerard Butler’s latest action film sees him single-handedly prevent World War Three as he captains a US submarine which is stuck in a cat and mouse game with Russian subs in the icy waters off Russia. There is, of course, a certain attraction in the ridiculousness of these type of films: endless explosions, preposterous plots, energetic performances and punchy one-liners all have their own lure in their brand of “switch-off and enjoy” cinema. Hunter Killer, however, pushes far beyond the “leave-your-brain-in-the-foyer” fun and does little to keep its audience awake, let alone engaged.

Action films are difficult genre to craft. Ask any successful director of comedy films, for example, and they’ll tell you one thing: it’s hard and serious work making comedy. More often than not, if it looks like the actors had a laugh on-set, then the resulting film is rubbish. And so it is with action thrillers: they need to be tight and well-paced, with well-crafted narratives and convincing visual effects. As an action film, Hunter Killer is none of these things, flicking as it does between submarine fights and unfolding military chaos on-land. Gerard Butler plays Commander Joe Glass, the new captain of the USS Arkansas which is embroiled in a high-stakes conflict after the Russian President is kidnapped by one of his ministers who is intent on starting nuclear war with the Americans.

The American response is co-ordinated by Gary Oldman as the Chairman of the Joint Chiefs of Staff, who seemingly handles every situation by shouting at a room full of people in the hope of de-escalating tensions. Gerard Butler is on his usual blockbuster form and makes for easy watching, even when presented with a script which is rather stilted as it attempts to deal with ideas about pre-emptive warfare and the tricky tightrope that is international relations.

The main problem is, the film can’t get passed its contrived and uninspiring script. When his submarine comes under attack from a Russian destroyer, for example, Commander Glass employs the help of a Russian sub captain he has rescued (played by Michael Nyqvist, in one of his last roles before his death in 2017) to talk to the men on the destroyer who, surprise surprise, he trained-up back in the day. The resulting shots of Russian sailors, looking up at the tannoy with shock and awe as their beloved former captain recites their names to convince them of his authenticity, are cringe-inducing, to say the least.

More generally, the claustrophobic world of a life underwater is presented without much thought, and when attacked, the submariners randomly shout out more numbers and decimals than can be found in an A Level maths paper. It is obviously meant to ratchet up the tension but it just results in a confused and hollow spectacle. The green-screen special effects are a bit ropey and the film mixes stock footage with its CGI submarines and warships. The resulting mishmash doesn’t help to engage the audience, and neither does the narrative which relies far too much on cliché: a problem, when the action which could have propped-up the familiar genre tropes is largely uninspiring. The land-battle scenes offer a welcome respite from the confines of the submarine (if only because they give something a little more interesting to look at than a load of monitors emitting incomprehensible noises and sonar waveforms) but, again, they suffer from a lack of a decent script.

These scenes centre on an attempt to rescue the Russian president, ordered by the US president (sporting a very Hillary Clinton-esque haircut). A team of elite Navy SEALs – led by Toby Stephens –  are sent in to recover the president, whilst Butler and his motley crew of submariners are tasked with extracting the party from the enemy base. Again, the whole thing is preposterous, and I was left trying to work out how the rescue party could parachute through a thunderstorm and yet land in bright, sunny conditions. I devoted a good five minutes to this task, hardly a ringing endorsement of the grip-your-seat action which was clearly intended.

Hunter Killer may well be a film about submarines, but it plumbs the depths of Gerard Butler’s particular brand of action blockbuster. He himself is perfectly acceptable, but everything else around him, from the dodgy special effects to the ludicrous narrative and unconvincing plotting, is pretty dull.